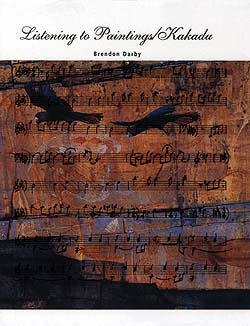 Listening to Paintings was born out of frustration, and what I considered a total lack of sensitivity by radio music programmers. In retrospect, my criticism was totally unjust. I could hardly expect the programmer to anticipate the subject and atmosphere of my paintings and play music of a complimentary nature. It was a no-win situation, even when they got it right I would feel sorry for the other listeners out there who were painting something completely different. However, very occasionally a piece of music would sit so well with a painting, that together they seemed to create another dimension. When I mentioned this to my wife Julie, she suggested I had been inhaling too many paint fumes.

Of course, the combination of sound and image is not a new concept. It has been very successfully exploited through the film industry for ages, but it took me a long time to realise that a complimentary union of both aural and visual stimuli can be very effective even with a static image.

1990 I decided to write some music in an attempt to describe in musical terms, the same landscape I was trying to describe with paint. A field trip to Kakadu in the Northern Territory seemed an ideal location for this experiment. My first problem was the extra equipment. Together with all my normal field gear, I now had a very heavy reel to reel tape recorder to record the ambient sounds. It was time to enlist an assistant.

Julie was perfect! The fee was right and she was usually so far behind that I could hardly hear her cries for help. Also, as it was her first time in Kakadu, she didn’t mind setting up the recorder right at the edge of the billabongs. I must admit to considering the possibility of being the first man on earth with a high quality stereo recording of his wife being eaten by a crocodile. Of course, it didn’t happen.

Shortly after talking to a ranger, Julie resigned, leaving me to carry all the gear. You just can’t get good help these days.When I returned to my studio in Perth, I set up a very compact music work station which enabled me to work on the paintings and music in the same room, at the same time. As this was my introduction to computer technology, the music I eventually managed to store on computer disk was done somewhat unconventionally. I presented this to my very clever friend James Hewgill at Planet Sound Studios. When he stopped laughing, he actually managed to break the code, make some sense of my new approach to computer programming, and transfer my music to tape.

The exhibition at Gallery Australia was well received to the point where all the paintings were sold, with the accompanying music on tape. This left me with the music, but no images. I decided to reproduce the paintings in print form and present them in a portfolio with a cassette of the music.

About a year ago, over dinner with Gary Ridge and Norbert Roth from Sun Music Australia, we decided to re-record the music, replacing some of my not-so-accomplished computerised synthesizer playing with some very fine musicians. It was also decided to produce this book to house the images and the compact disc.

I would like to thank everybody who has helped me with this project over the years, and I hope “Listening to Paintings – Kakadu” works for you. If it doesn’t, try it with paint fumes.

Brendon Darby (Adapted from the Introduction to “Listening with Paintings – Kakadu”, published 1995)